At NASA in the Spring of 2018, I was tasked with designing a rig that would transform the MED-2 into a rowing machine on earth. Currently, the MED-2 can we be used in zero-g to row, but we would like to be able to test that here on the ground. This projet was really fun, and even though I started it pretty late into the semester the interns of the next few semesters built it. 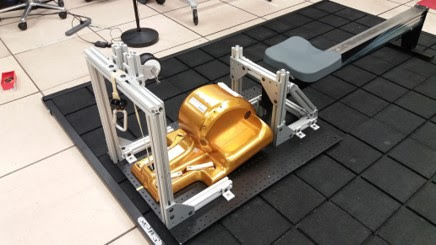 The MED-2 is a very powerful device because it allows you to get position data, and you can change the load on the user in the software. We wanted to create a rowing setup to be able to row on Earth because astronauts could already row in space. In order to row with the MED-2, we had to design a rig that would route the cable towards the user sitting on a Concept-2 row rail. Additionally, we had to place foot plates and a mounting point for the rowing rail. Another thing we were trying to do was create the smallest footprint possible with the system so that we could bring it to the underwater habitat for NEEMO.

Without much time, I quickly modeled up a system where one side is a mounting system for a pully and the other side is the foot plates and rail resting point. Basic drawings can be found here. It was really fun just to figure out how to work with the 80-20 extruded aluminium because there are limitations to how it can be assembled.

After getting to see footage of people testing the device, I realized a huge design mistake that I didn’t think of earlier. The whole device and platform lurches upward when a user tried to row on it. This is because the device and platform is not secured in a way that prevents pivoting around the track that the user sits on.